Objects Visible to the Landlord During a Surprise Flat Inspection

Three books about dying by the bedside:

One about the Holocaust

One about the half-lives left after brain surgery

One about our missing rituals for death

No chick lit like I promised my counsellor I would read

Two heaters, one broken, why do I never get rid of things?

A bird because we watched tūī in the garden of his mum’s house where we would come back to all through that month, the first times with her and then alone.

A bird because on the day before she died, a tūī flew into the long pane of glass by the kitchen. A tūī or a pīwakawaka or a sparrow, I can’t remember. A harbinger of death kept out and lying dead amongst the tulips.

A bird I saw and walked past, avoiding, until Hikurangi saw it too and said we needed to do something. Kneeling down to roll it into an envelope, I screamed as it rolled back out,

its wings crisp with death. I can do it, I can do it, he said, but I crouched back down and tried to roll it in again.

An envelope of dead bird we stood holding together, not knowing what to do with until I threw it in the bin behind the house and tried to forget about it alone amongst the soft plastics.

Later, when we were alone in the house for the first time, I cried in front of him and he asked why. Because it’s sad, I said, and he cried too and hugged me. I wondered if this was what it was to be an adult: just the two of us standing alone in a room gripping each other.

In my room ten scarves. One that was his mum’s, the colour of a faded bruise and covered with birds in flight. 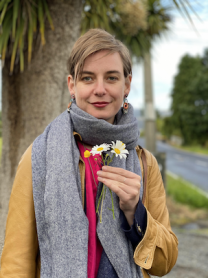 Marianne is a public servant and writer based in Wellington. Her work has appeared in Landfall, Mimicry, and in numerous government reports.