I did not look into his eyes, the youth who was armed with the venomous words he liberally spat at me. The words, symptoms of age-old wounds that, left unarticulated, had swelled up, rushed through his veins. The youth may not have known the reasons for his anger, knowing only what he felt, and not knowing what to do with it except to release it onto another and feel for that moment a release. Perhaps he also saw how unleashed anger arouses fear, and he felt a surge of power. By casting anger onto another, he seized some control and was free. Even if it were for but a moment.

The youth shared a womb with anger. And his mother shared a womb with anger. Anger carried by his foremothers, as they watched transgressions committed against their people: land taken, blood flowing, empty promises, vain sacrifices. They watched their people being cast aside, heavy with sadness that over time hardened into anger. Anger takes up precious space in wombs, in hearts, leaving space for not much else. This anger flowed freely through generations.

Anger became the words he spat freely because wounds only beget wounds.

I walked by quickly, dodging his bullets, his anger. There in the space between that youth and I existed nothing but prejudice. In that space, knowledge and understanding is limited, vision is blurred, and all that can be seen and heard is the self. In spaces like those, wars are bred.

What did he know about home, my home? I have no home in China. I never had a home in China, except through my grandmother, my ngen-ngen.

My memories of her were limited, and I often wished there were more. For a long time, I would fill my mind with memories I made up by projecting my present self onto old images I had of her, of us together. I would often creep down the stairs in my mind to find her sitting in her rocking chair, underneath the oscillating ceiling fan, smoking, and we would sit together. This image had been my refuge over the years. I would also dream of her. She would come bearing the foods I have, since her passing, been missing, and we would feast together. My aunts tell me this meant her soul was visiting. Ngen-ngen always knew when I was trying to reach her.

Memories of the times I spent with ngen-ngen: perpetual humidity; shadow of the oscillating ceiling fan whisking across the room; hot afternoons filled with the sound of her telling me stories, her voice and the sound of the fan synonymous; us sitting on low wooden stools filling dried lotus leaves making zong[1]; the sound of her pounding chillies with the grey stone mortar and pestle; the smell of chicken curry cooking, fish being fried and leng ngau tong[2] bubbling; me stirring pok chang[3] batter as she cooked them; sitting together on our veranda watching our glorious gum loong yu[4] glide through the water. So many images like these that I hold possessively, these grainy old photographs.

Our times together were filled with stories. Stories I have pieced together and tried buffing up with bits and pieces of research. There was that time her sister and she were smuggled to Hong Kong in a boat, hiding all their valuables in their underclothes to avoid them being seized. And the times before they left for Hong Kong, years they spent mostly hiding. Her father used to roll them up in sack cloth and hide them under the house so they remained invisible, unseen by the Japanese soldiers rippling through the villages.

It was the Sino-Japanese War that uprooted them. Wars do that, they uproot you.

The house where she died was the house my father grew up in. All my life we called it ngen-ngen’s house. I have a photo of us all on the porch, standing on a blanket of red flakes spread out on her green concrete floor, remnants of the firecrackers set off to welcome the New Year. Chinese New Year at the grand old house was always very yit lau,[5] gathering for the reunion dinner when we feasted each year on the same dishes: steamed silver pomfret, fu chok tong, pak jam gai, ho see fatt choi.[6] Sitting at the round dining table in brand new red outfits, eating nin gou[7] and Teluk Intan chee cheong fun[8] on New Year mornings.

Ngen-ngen left Hong Kong for Teluk Intan to be married. It was a marriage arranged by her father, and the patriarch of the Ng (伍) family of Teluk Intan, my great-grandfather. Marriage was her big adventure, her escape, but when she got there, she found my grandfather had already wed to a girl of his own choosing. My great-grandparents took ngen-ngen in as their daughter-in-law and she, in turn, dutifully played her role: bore children, ran the household, and when grandfather’s first wife passed, she took in their children. Together there were 13. And they all grew up in that grand old house. I wonder about the things the house must have seen, and known, the secrets she kept within her louvred windows and wooden doors.

For a long time, I wondered if she had ever wanted to escape from her escape. But ngen-ngen embraced it wholeheartedly; tilling the ground, sowing the seeds, she plowed the earth and nourished it with her sweat and blood. She planted her feet firmly on that ground and made her escape a home. My last memory of ngen-ngen in her house was on her seventy-second birthday. Our family threw a party, and she wore a golden pantsuit. I remembered the satin of her suit, the fire crackers, the fluorescent lights, the whirring fans, the mosquitoes. I would try not to blink, because the next memory I had of her in that house was her funeral.

The last time I saw the grand old house, she had been barren for years. It was years after ngen-ngen had passed. I walked through her, stepping on her green concrete floors, and walking up the steep wooden stairs. I stood there, in the middle of the upstairs lounge, under the dusty ceiling fan, my feet on her wooden floors listening to the silence. I felt my weight on the now frail house, and heard her sighing as her bones bent, tired and old. Her paint peeling, I knew she felt the weather beat upon her, that rain would feel heavier on her old structure. My heart ached as I touched her walls. I put my ears to them to hear her whisper.

But all she would let me hear was the sound of rice bowls clinking, chatter, and laughter.

I asked her questions, questions about the secrets she bore as I wondered what would be left of ngen-ngen when her house falls. The house that had faithfully kept her, protected her, the house that had loyally held her secrets deep within its walls. Some days I listen to the wind to hear her whisper.

The first place I called home was a double-storey terrace house in Section 8, Shah Alam, Malaysia. Number 18. Dad was drawn to the auspicious number 8, auspicious for being phonetically similar to the word for wealth. ‘No harm in believing, isn’t it?’ Dad always said.

In the front garden stood two tall pine trees and a mango tree that never bore fruit. There was also a guava tree. The garden was more ngen-ngen’s, who often spent school holidays with us, than ours. Ngen-ngen and I would water the garden together each evening, and I recalled the paper-like purple bougainvilleas, and her favourites, the bright pink azaleas. I was hugging her tightly in the garden one morning, reluctant to have to go back to school. She told me she would be back soon. She did come back, but it was different, we never watered the garden together again.

After ngen-ngen died, our gum loong yu died too and we buried it in between the two pine trees. Shortly after that we left number 18 and our garden behind for Aotearoa. Since then, I have been moving between the two: the perpetual humidity and the cold.

Both the perpetual humidity and the cold have made me feel these things: Safe and exposed; joyful and sad; liked and disliked; wanted and unwanted; understood and misunderstood; accepted and rejected; free and oppressed. I felt at home and unsettled; loved, and unloved, often, all at the same time.

When we first moved to the cold, I had a uniform: a white shirt and a tie, a kilt, tights, and a blazer pulled smartly over a blue wool jersey. Underneath all that, I could still feel the cold. On the first day of school, the girls were surprised I spoke English and they asked me whether Malaysia was in China.

There in the cold I said the word ‘China’ with such scorn, standing in agreement with the youth. Hand-in-hand we were complicit. ‘Fuck China,’ he said.

‘But aren’t you Chinese?’ the girls asked. ‘I have no home in China,’ I said.

It was not until I met the youth that I heard the cock crow. There in the cold, I had rejected her.

I had rejected the part of me that was her.

I have a friend who was born of those whose blood seeped through the hull of Teremoe,[9] the sturdy waka taua that carried his forefathers through battles along the Whanganui River. His foremothers have watched transgressions committed against his people, but they must have buried their anger deep in the land, because his words to me bore no anger.

‘Aotearoa is your tūrangawaewae,’ he said.

I looked it up in the dictionary: tūranga, standing place and waewae, feet. Translated it means ‘a place to stand’. Through a friend’s invitation, the youth’s words were deflected. The healing of a wound. Come stand with me on this land. This land that is made up of many things, like the blood and bones of all those who stood here long before us.

On this land there is space.

Not long after, I saw ngen-ngen, standing outside her grand old house, her bare feet on the ground that is my heart. My heart, now her tūrangawaewae.

I smiled at the thought. Our hearts are made to carry one another.

In our hearts, there is space.

[1] A traditional Chinese rice dumpling wrapped in lotus leaves that is usually eaten during the Dragon Boat Festival.

[4] 金龍魚. The Asian arowana, a freshwater aquarium fish, also known as the dragon fish, believed by the Chinese to bring good luck and prosperity due to its red colour and coin-like scales.

[5] 热闹. The Cantonese phrase for bustling, used more to describe a harmonious or joyful busyness.

[9] A war canoe that was bequeathed to the Dominion Museum in 1930 by the Hipango family of Whanganui. 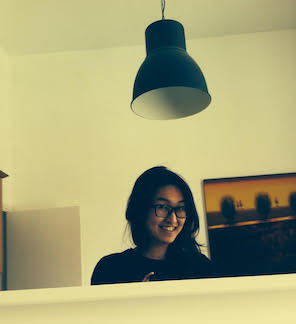 Raina was born in Malaysia, grew up in Ōtepoti and is living in Pōneke. She spends much of her idle time pondering about connections, and relations, and all the things that tie us together (or cast us apart).