Poppie Johnson, whose story ‘Nights of Everywhere' is published in Issue 14, gives us her take on titles.

Poppie is a 33-year-old writer and teaches English at Wakatipu High School. She grew up between Christchurch and Aoraki-Mt Cook and is currently enrolled in a Masters of Creative Writing through the University of Edinburgh.

Titles. Ugh. The very thought is enough to make me break out in a cold sweat. There’s a few schools of thought on the matter, they range from placing importance up there with voting rights and oxygen down to the sort of attention you’d pay to roadkill on the highway.

School number one: Shorter the better

I always admire these authors. They have steely self-discipline and an ability to distill a whole story down to one word. Quite often they seem to be literary giants, which just adds to the mystique. Mystique, that could be a good title, I’ll file it away. These are the books that you look at and say ‘Yes! That’s it exactly!’ Think Beloved by Toni Morrison, Warlight by Michael Ondaatje or Disgrace by JM Coetzee. See what I mean. They’ve all won a Booker or Pulitzer Prize. Intimidating authors. I’ve tried this method but never seem to be able to find the right one word.

This one is one of those ‘rules’ that you know you can break but feel as though you should keep to. It’s the classic. Three words, it’s balanced somehow, sits nicely on a page or cover and gives you enough scope to describe what you’re talking about. Think The Bell Jar by Sylvia Plath, The Doll’s House by Katherine Mansfield or Yellow Brick Road by Witi Ihimaera. This normally ends up as my go to, I look for a phrase or moment in my text that seems to stand out and try to convert it into a catchy hook. That’s how this story found its name. 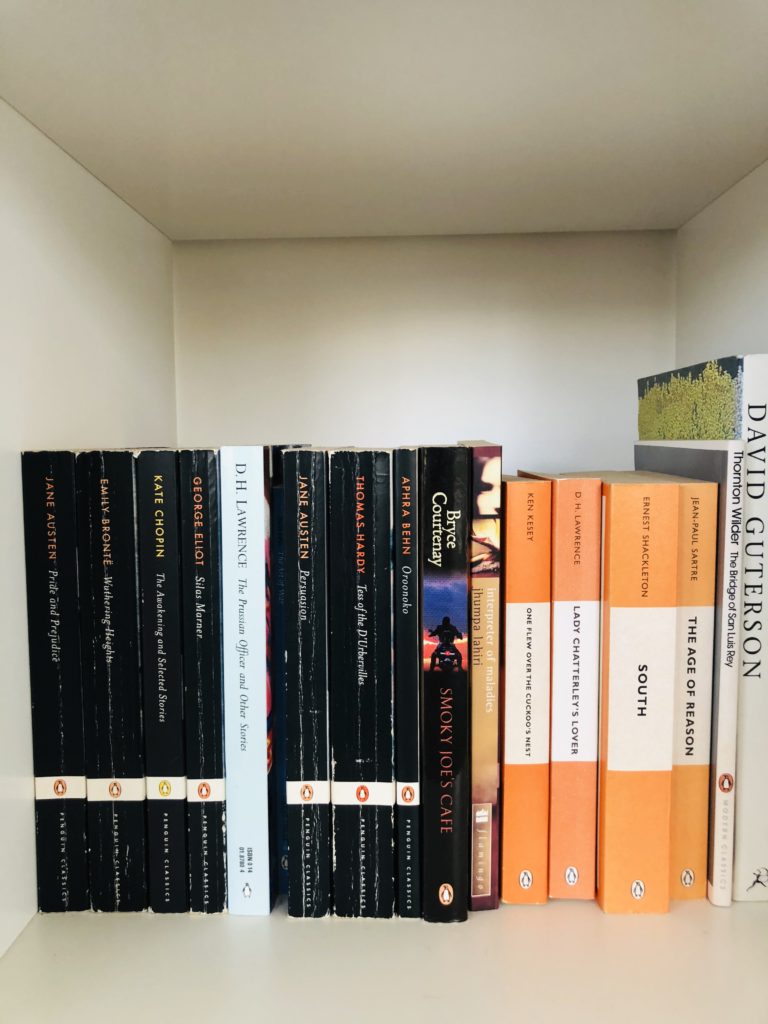 School number three: Write a sentence and call it a title

Recently in vogue is the attraction of ‘more is more’ rather than ‘less is more’. There’s generally a satirical or humorous undertone, a thought or idea that is very clearly expressed and the style continues into the piece. Think The Hundred-Year Old Man Who Climbed Out the Window and Disappeared  by Jonas Jonasson or Elinor Oliphant is Completely Fine by Gail Honeyman. The titles don’t leave much to the imagination. But they do get you to open the page and read the first sentence.

For me, titles are something I agonise over after I’ve finished writing the piece. I go through all three schools of thought on titles at some point during the creative process and usually end up somewhere in the middle. Nights of Everywhere started off with the predictable title of Castles in the Sand. That was a bit clichéd and the first line seemed to have a powerful effect on readers and so the title evolved. A title is the very first thing people see, it’s like having an attractive front door or entranceway, you want to entice them to come closer, to look at what you’ve written and be tempted to unravel the tiny mystery you’ve given them with those first few words.

Poppie Johnson is a 33-year-old writer and teaches English at Wakatipu High School. She grew up between Christchurch and Aoraki-Mt Cook and is currently enrolled in a Masters of Creative Writing through the University of Edinburgh.

Headland Alumni: Where are they now? 17 days ago

It’s just a name 2 years ago