Ray Bradbury wrote in Zen in the Art of Writing: “Plot is no more than footprints left in the snow after your characters have run by on their way to incredible destinations.” We believe that the destination need not be incredible, but that the characters are indeed the lifeblood of a short story.

We’re wrapping up our Issue 9 characterisation series with some thoughts from Matt Billington on creating “people, not characters”. In Part I, Craig Burnett shared his insights into creating his character Kirk in ‘Seeds’. Next, Alie Benge discussed “borrowing a rib and breathing life” into hers.

Matt’s story, ‘A Use For Everything’ appears in Issue 9. Matt grew up in Rotorua and has spent the last eighteen years playing in DIY punk bands, his current one being The Prophet Motive. He enjoys reading Donald Ray Pollock, listening to Propagandhi, and lives in West Auckland with his artist wife Kerry and son, Jordan. 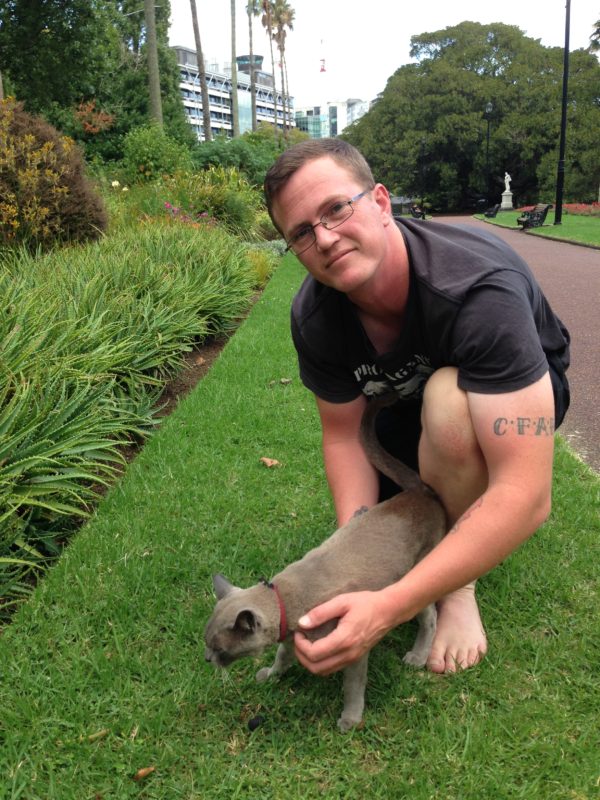 A Use For Everything is my first publication. The protagonist is Jamie, and the story is told through the eyes of an unnamed narrator. Both are kids.

Before this story came thousands upon thousands of hours of failed attempts at writing characters – tattooed gangsters, overbearing parents, and Double Brown-swilling punk rockers – all crashing and burning under cliché and frustration. Caricatures that sounded how I thought they should sound, and all ended up sounding the same.

A ‘character’ is a portrayal of a person. The stories I love do not have ‘characters’. They have living, breathing people who, fictitious though they may be, are people I feel I know.

Anything by Amy Hempel (her book Collected Stories is writing mastered. None of us will ever be that good).

So my goal is to turn characters into People. People you haven’t met, but People you know.

There are three things I did to develop the People in A Use For Everything. The first thing was to understand who was telling the story, and where and why they were telling it. I imagined the narrator leaning over the handlebars of his bike, eyes fixed on bare toes pushing gravel in wave patterns as he told this story to someone new. He has to tell it because it is something he can’t understand and he can’t digest it.

A Use For Everything is someone talking about something they don’t want to talk about. People talking about uncomfortable events will often avoid them, something us readers do not like. I got around this by using repetitive phrases:

Jamie and the time he did that thing with his penis

It is Jamie I’m going to tell you about though, really

Not long before he did that thing I’m going to tell you about.

This gives the reader a sense of the narrator’s discomfort, while assuring them that we are going to talk about it.

The second thing was language. People telling stories aloud seldom use correct English; kids such as John, Andrew, Jamie, and the narrator would not use it at all. He says, ‘That’s me, John, and Andrew’ not ‘John, Andrew and I.’

How many times have you heard one of your mates tell a great yarn, and you have repeated it and it has fallen flat? Did that mate of yours get his language technically correct, or was his timing and imagery bang on?

The narrator speeds up with longer sentences when he is talking about all the awesome stuff they get up to. He doesn’t need to say ‘this was awesome’ or ‘this really sucked’ because the reader can already tell how the narrator feels by the pace of the narration.

Also, for the first time, I disregarded speech quotations. I originally did this as an exercise to really really really nail down actions to indicate who was speaking – the gulps, the fidgets, the toes-in-gravel, etc. I kept it, because on the page it looks like the speech and actions are one thing, a much stronger visual for the reader who isn’t distracted by pesky “”””” marks and new lines for each part of dialogue. More importantly, it allows the narrator to describe the people around him through his own eyes but using their language, the way kids repeat their parents’ points of view.

And last of all, interior lives. Readers love to know where a person comes from, it explains why they act the way they do. A massive trap for writers is the dead wood of ‘backstory’ that will clutter up your writing like shoes, toys, and school bags left in a hallway. Explaining an action by describing a past experience is tempting, but it risks taking the reader away from the actual events of the story they are reading, and dulling the impact of the ‘present’.

It is more effective to show the reader a side of the Person with something physical. Here is an example, using Jamie: He lived with an uncle he spoke of in words as quiet as breath and as quick as you take a plaster off a scab.

The reader can visualise how Jamie feels about his uncle from this one sentence. It also keeps with the theme of the story (talking about something we don’t want to talk about) and uses a metaphor that relates to childhood (scabs and plasters).

So that’s what I was going for. It worked for these people in this story, it might not work for the next people in the next story. I’ll just have to keep bashing the keyboard and find out. We’re all different.

Matt Billington grew up in Rotorua and has spent the last eighteen years playing in DIY punk bands, his current one being The Prophet Motive.  He enjoys reading Donald Ray Pollock, listening to Propagandhi, and lives in West Auckland with his artist wife Kerry and son, Jordan.