Caoimhe McKeogh’s story ‘The Saturday Shift’ appears in Issue 8. Caoimhe is 22 years old. She studies English Literature at Wellington’s Victoria University and works in disability community support. Her previous publications include Headland and Landfall literary journals, and she was the recipient of Headland’s 2015 Frontier Prize. We talked to her about her story, what she’s working on, Issue 8 and how her work in disability support informs her writing.

Headland: We loved your story, The Saturday Shift for so many reasons. You bring unsentimental warmth and a depth of reality (especially to your dialogue) that is really special. Can you tell us where your inspiration for this story came from?

Caoimhe: Aw, thank you! I absolutely love “unsentimental warmth” – that’s definitely something I’m aiming for, but I had never thought to phrase it that way. To be honest, the bare bones of this story was basically a diary entry – I had this crazy summer where I was doing two full-time creative writing papers at once at the IIML and also working full-time at a disability care facility. I had to bring in a story for workshopping and had no ideas (or time to think of any) so just wrote down everything that had happened that day at work. Since then, it’s been through a lot of editing – it is definitely now fiction, and the characters aren’t me or my colleague or real clients anymore, but the inspiration was just a day in my life. 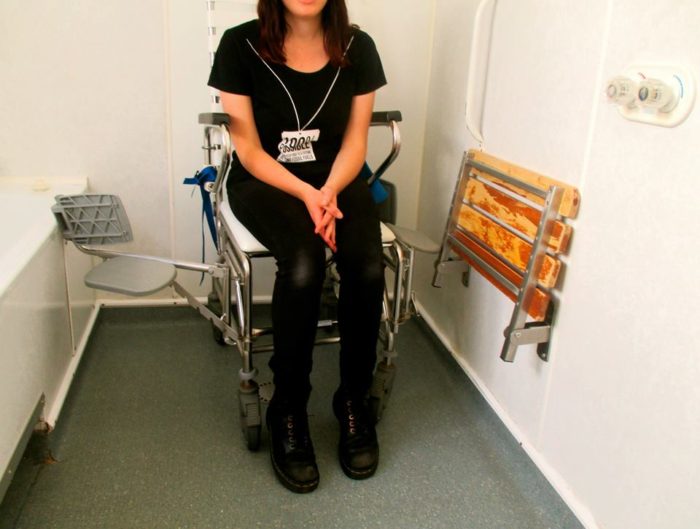 This photo was taken by one of the girls I used to support – it is me modeling the commode chair, which is used to shower people who use wheelchairs, and is mentioned in ‘The Saturday Shift’.

Headland: What is your favourite quotation from your story?

Caoimhe: Ooh that’s tricky! And it feels strange to answer, it’s like complimenting myself. Maybe when Jono tells Bethany, “You can be Superman like how I’m Batman!” but Bethany reaches out sideways instead and shouts, “Bird!” Finding a way to build characters who have little to no language can be difficult, but I think Bethany turned out to be rather endearing, and this line shows that she’s a bit sassy too. 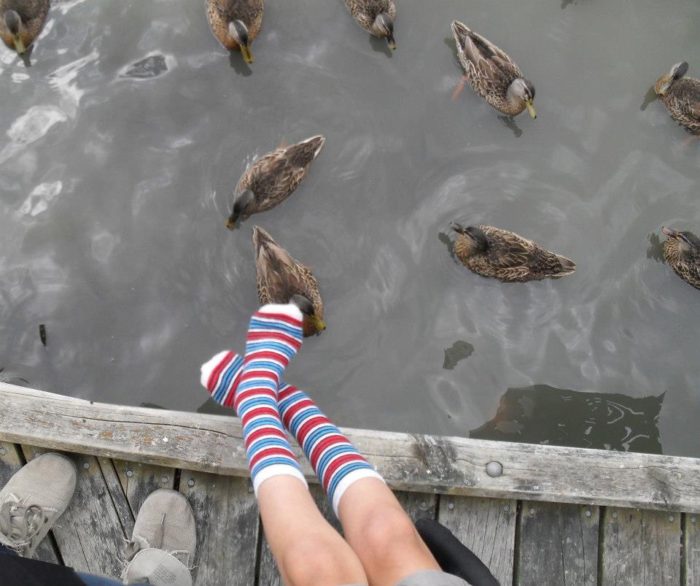 An outing with a boy I supported for years (who had very groovy socks) to feed and sing to the ducks.

Headland:  In Lemon (awarded the inaugural 2015 Frontier Prize for best story by a previously unpublished author), your main character is a young child with special needs. You seem to know your subject material and characters well. Given that The Saturday Shift also features some characters with disabilities and the care facility is the setting for your story, are these stories part of a thematic series or larger project? (We hope so.) Can you elaborate on that?

Caoimhe: Yeah, you got me! I’ve planned a novel-length project of interlinking short stories around the disability community, and have slowly been writing them up – Lemon is the first chapter and The Saturday Shift is the third – between them is a story called Lucy that was published in the most recent Landfall – it features Lucy from Lemon and Darcy from The Saturday Shift. Later in the book, Adam who was in the background a bit in The Saturday Shift becomes a very important character. I have a terrible habit of filling my life with not-writing-the-book things, though – I did an Honours degree in English Literature in 2016, and wrote nothing but essays all year long. I will try to get back to it – it’s lovely to hear that someone already likes the idea! 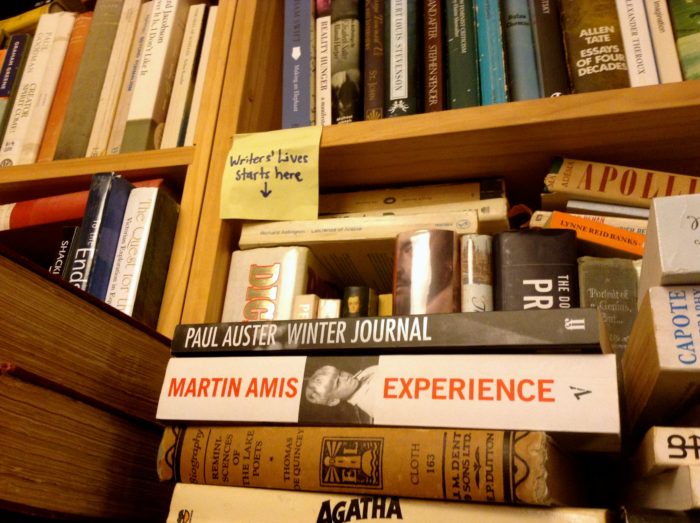 My favourite post-it note! This is in Pegasus Books in Wellington. Obviously, it’s just about the section of the bookshop, but I love the idea of writers’ lives starting somewhere specific…

Headland: When we read The Saturday Shift we talked about how well it fitted into the theme we’d inadvertently stumbled upon, on Labour Weekend coincidentally: work. Do you consider this a ‘work story’? Why/why not?

Caoimhe: Oh, definitely, yes. I’ve been working in the disability sector for close to ten years now – I started doing after-school support work when I was fourteen – so to me ‘work’ is often along the lines of what is described in this story. The Saturday Shift is also about the relationship between co-workers, which was a theme that I noticed in the other ‘work stories’ in Issue 8 of Headland too. The place and people and actions of ‘work’ are such a big part of our day-to-day life, and it’s very interesting to hear about other people’s versions of that – I’m fascinated by stories from my friends who work in hospitality, or retail, or labouring … one person’s normal can be incredibly strange and scary to another person, or really intriguing. I loved reading Frank Beyer’s Smashing the Machines in this issue of Headland, because he was describing the day-to-day life of a postie, which is a job I’ve always been fascinated by! 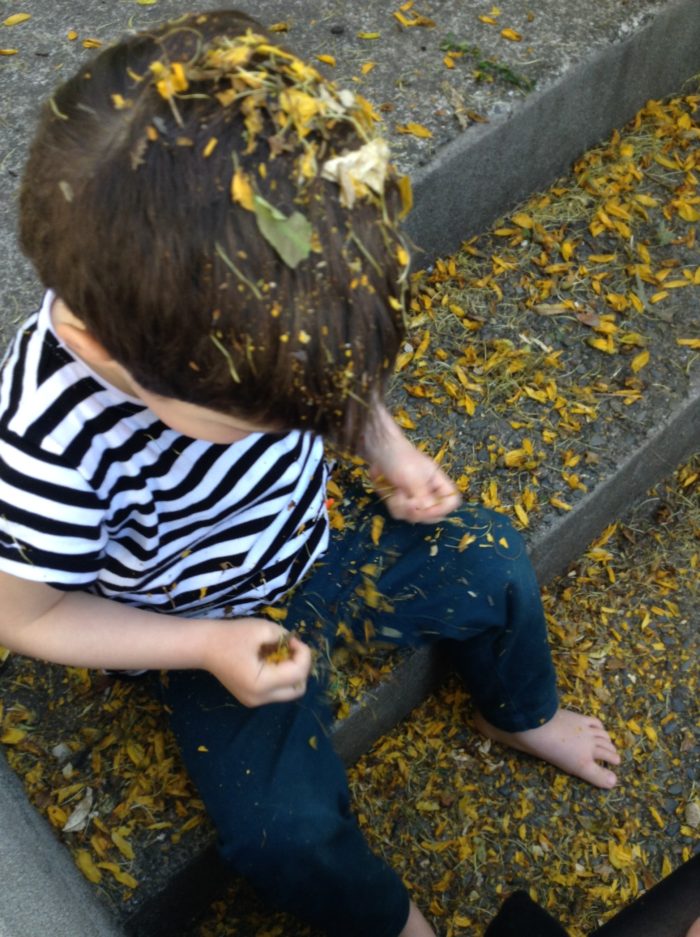 This is a boy I still care for, covering himself in kowhai flowers. My favourite part of my job is when something totally unexpected but beautiful happens, and this was an example of that! 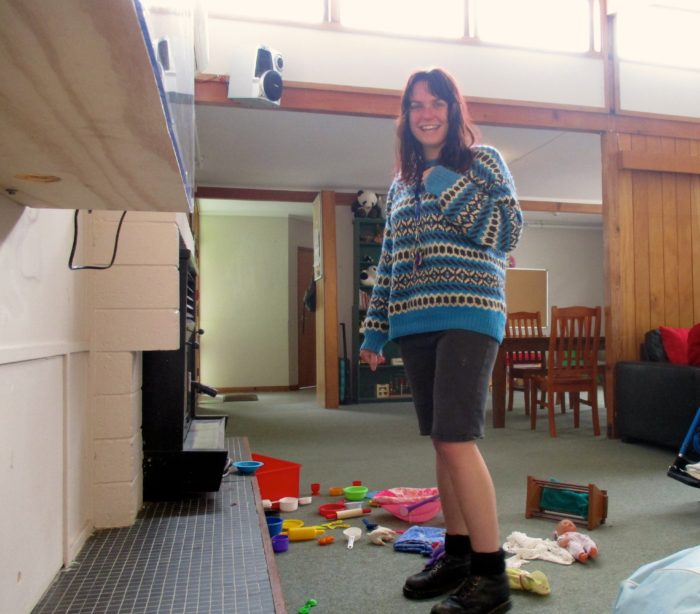 This is me in a care facility very similar to the imaginary one where ‘The Saturday Shift’ is set. (On this particular day, I had been locked out of my house overnight and had to turn up to work in my boyfriend’s clothes.)

Headland: A year on, has being the recipient of the 2015 Frontier Prize affected your writing? How so?

Caoimhe: It was definitely a real confidence boost for me. Lemon was my first submission to a journal, and I was very aware that submissions often lead to rejections – I had steeled myself for plenty of ‘no’s’ before the occasional ‘yes’ might happen. Instead, I got a lovely email from Laura and Liesl saying the piece would be published, and then a couple of months later I won the Frontier Prize. Since then, I have had quite a few ‘no’s’, but I had the confidence to keep going. I ended up with five pieces published in various journals in 2016, and also with the confidence to build on Lemon to start creating the longer work that we were discussing earlier. It also gave me an extra sentence for my ‘author bio’ in journals, which is great because I always have real trouble thinking of anything to say! 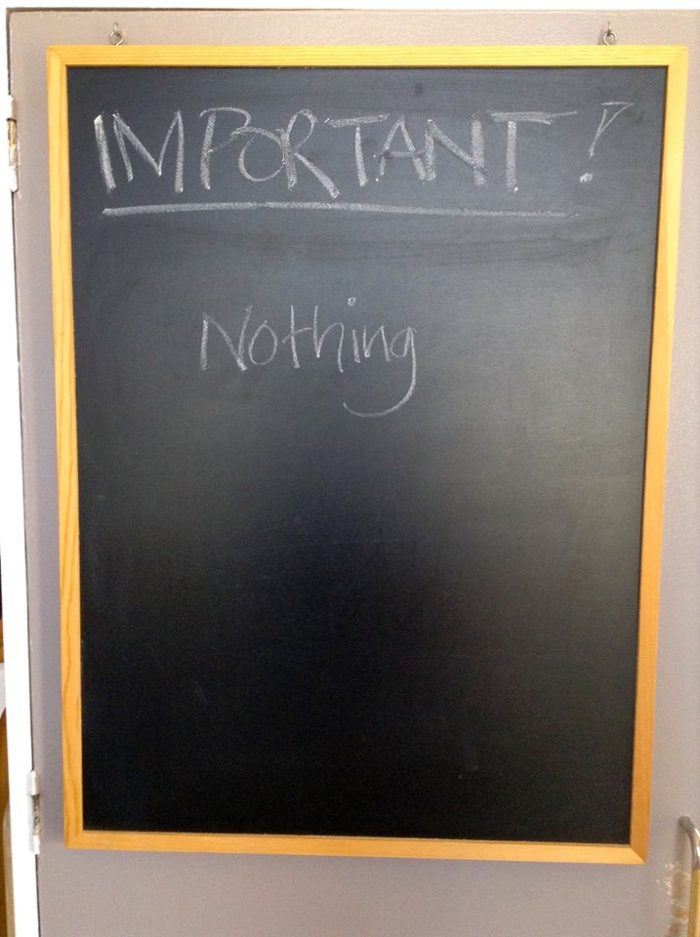 The day that the noticeboard at my work had a bit of an existential crisis. 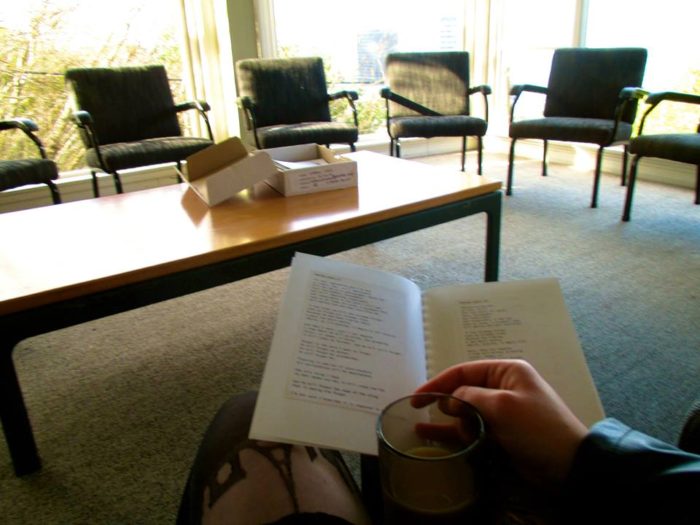 A moment of peace and quiet in the IIML workshop room! A very special place to me, and the reason that both ‘Lemon’ and ‘The Saturday Shift’ came to exist.

Headland: What are you working on now?

Caoimhe: There’s the longer work around disability, and then I also have a mess of various things going on … I have two other novels started, and one of those is taking up most of my brain right now, but I’m also planning a children’s picture book, and writing quite a bit of poetry at the moment. In February I’ll be starting three more classes at the IIML – Creative Non-Fiction, Short Fiction, and Screenwriting for Television, so then I’ll be even more all over the place! Finishing things is definitely the bit of writing that I find hardest – there are so many things to try out, and the newest one is always the most exciting. Obviously, the first half of 2017 will be spent starting even more things, but perhaps my resolution for the second half of the year can be to get some stuff finished! 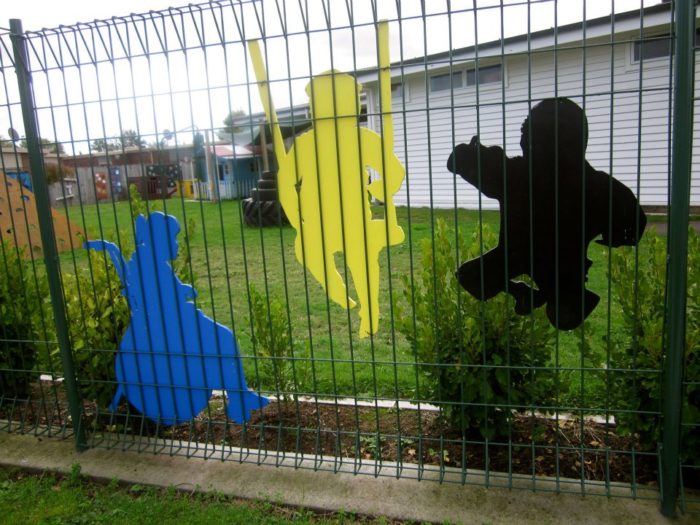 Silhouettes of three children I used to support, hung on the fence of the special-needs school that I worked at for two years in Hamilton.

Headland: Are there any other stories in Issue 8 that speak to you?

Caoimhe: I really enjoyed Issue 8, and the accidental-theme of ‘work’. Coincidentally, I have been off work this week following a minor surgery, and the restlessness and lack of routine that the absence of work has left for me had me thinking about work’s place in my life. I think the story that really wowed me, though, was Sandra Arnold’s When the Wind Blows. It manages to be incredibly detailed and incredibly subtle at the same time, and is so beautiful – it really stayed with me long after I finished reading it.

Thanks so much Caoimhe, for chatting to us about your stories. We loved The Saturday Shift.

Caoimhe McKeogh is currently working towards a PhD in Creative Writing at the International Institute of Modern Letters. Her poetry and prose has been widely published in Australian, Irish and New Zealand journals, including Overland, Landfall, Cordite, Meniscus, and The Blue Nib. She was the recipient of Headland’s 2015 Frontier Prize and has been a member of Headland's editorial team since 2018.
Previous PostWho is telling our stories?
Next PostSo, um, what is creative nonfiction exactly?

A Love of Food and Writing 5 months ago

Extras: Jenni Mazaraki and Lucy Zhang In Conversation 10 months ago

Figuring it out 11 months ago

Reflections of a teacher, writer and rebel 11 months ago